Finger skateboards are one of the most famous sports all over the world. Using their middle and index fingers, riders may perform the fundamental tricks and movements of skating on the miniature sidewalk surfboard.

Everything a standard-size skateboard has is present on a fingerboard. In addition, there are bushings, interchangeable wheels, trucks, grip tape, and a wooden, plastic, or paper deck and grip tape. Finger skateboards typically measure 3.9 inches (100 millimeters) in length and 1 to 1.3 inches (26 to 34 millimeters) in width.

A fingerboard and a real skateboard have a scale ratio of about 1:8. Numerous books have been written regarding the fingerboard technique. These books relating to finger skateboards help in learning the fundamentals, stunts, and riding methods.

The History Of The Finger Skateboards

Lance Mountain is credited with creating and inventing the short form of the current skateboard. Powell Peralta’s 1985 video “Future Primitive,” featuring the skateboarder from the Bones Brigade, introduced the fingerboard to the world. 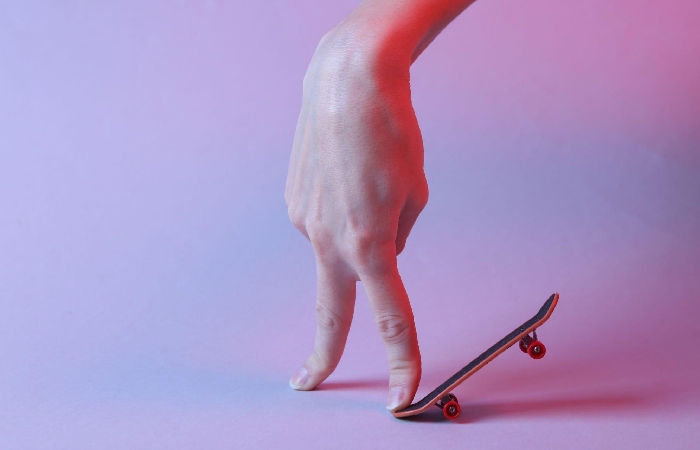 In chapter four of the film, Mountain practices his contest runs while using a fingerboard in a metal double-bin sink in front of a group of admiring buddies.

Despite the toy’s potential for amusement having an immediate impact, it took until a decade later for the first mass-produced replicas to finally become commercially viable. Then, the Canadian toy maker Spin Master introduced Tech Deck in the late 1990s as a brand that would investigate the marketing potential of skate brand logos on miniature skateboards.

One company sold more than 20 million finger skateboards in the late 1990s. New labels entered the market at the turn of the millennium; examples include Super Mini Boards, Deluxe Finger Banger Boards, Buckle down, Berzerk, and Pro Precision.

The fingerboard craze swiftly surpassed the limits of the skateboard industry. As a result, small sidewalk surfboards were soon available for purchase at Wal-Mart, Toys ‘R’ Us, and other well-known retail outlets.

However, it is safe to claim that Lance Mountain’s use of miniature skateboards motivates the homemade finger skateboards built in the 1960s. They extensively market as keychains in skate and gift stores.

These companies received a free promotion and royalties for each fingerboard sold. As a result, fingerboard competitions started to draw hundreds of participants and spectators suddenly. 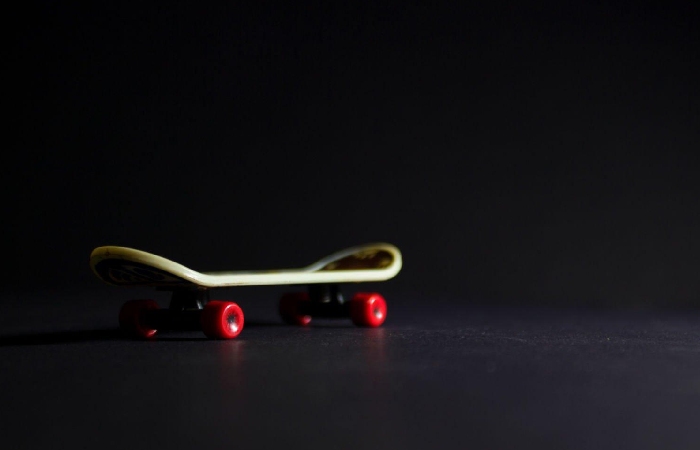 So it should be no surprise that disagreements and legal actions around using the term “fingerboard” as a generic term or trademark began to emerge. Even fingerboard toys were once included with McDonald’s Happy Meals. The mental skating crazy eventually subsided, though.

Finger Skateboarding Is Not Dead

The fingerboard scene is still alive and well in Europe, Asia, and America. Fast Fingers is a series of competitions that Martin Ehrenberger started in 2000.

The event gained popularity, and the world’s premier small skateboarding tournament, the Fingerboard World Championship, was introduced in 2008 by the fingerboard inventor. Finger skateboards are inexpensive toys, but their cost has been broadly consistent since the middle of the 2000s.

The fingerboard industry jumped at the chance to cash in on the popularity of these small, four-wheeled toys, adding new accessories, parts, and equipment to the cart. Today, you can build the ultimate modular fingerboard skatepark and replicate your preferred street skating location with hundreds of accessories and items.

Starter kits, collector’s editions, halfpipes, ramp sets, handrails, benches, stairs, fun boxes, spines, tuning tools, replacement parts and other practical elements are all available online with a short search. Then, in the corner of your living room, you’ll find everything you need to simulate the outdoor skateboarding experience.

So, even though finger skateboards are a small-scale recreational activity, there is a thriving professional finger boarding community.

Is Fingerboard A Pocket-Sized Skateboard?

Finger Skateboard Ramps And Rails For A Miniature Skatepark

Building a skatepark inside the house has never been simpler, thanks to fingerboard rails and ramps. Your mini skateboards are the ideal match for these tiny ramps and rails. They resemble the features and shapes of obstacles seen in regular-size skateparks. 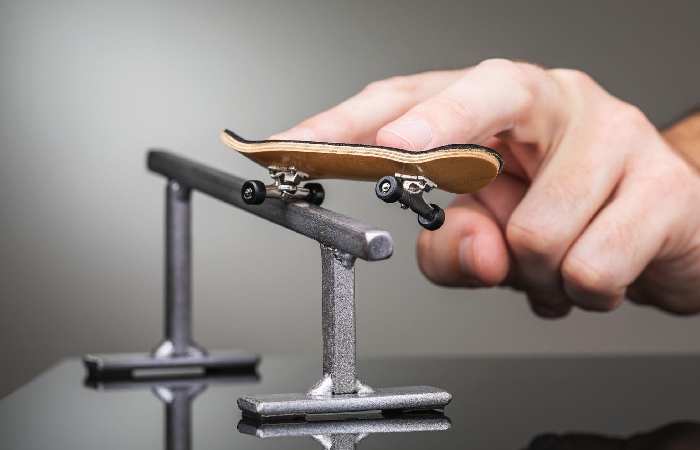 You can find anything in a pocket-size, from stair sets and iron rails to quarter pipes. Having a variety of ramps and railings not only makes finger skateboard more enjoyable but also helps you improve your abilities.

The Story Behind Finger Skateboards

The quality of fingerboard decks and other components has improved over time. People are now aware that fingerboards are ideal for mimicking authentic skateboard tricks and are not only for show.

Bring something fresh to the playroom if you intend to take on a toy line with an established name. Hot Wheels is teaming up with Tony Hawk and releasing tiny finger-worn skate shoes to compete with Tech Deck’s micro skateboards. Whoops, what?

Fingerboard skateboards gained popularity in the middle of the 1980s. However, tiny finger skateboards have a history dating back to the late 1960s. The little finger skateboard keychains are sold to devoted cube gleaners at skate shops. These small decks are explicitly made for the competition.

Although Tony Hawk and his company Birdhouse previously collaborated with Tech Deck for themed finger decks and playsets. The legendary skateboarding figure is now promoting Mattel’s new Hot Wheels Skate line. It is similar to Tech Deck’s merchandise in that it features working wheels and trucks. In addition to grip tape on top and custom artwork on the underside. Remember to include the Hot Wheels logo as well.

Live Wave Tv Antenna Reviews Vs. The Other Products

What is Toshiba Satellite C55? – Characteristics, Best, Features, and More

Best Smartwatch With Call Function – Compatible With iOS And Android